Owls are really majestic creatures and I love them. I love looking into their huge eyes and getting lost in them and so when a friend requested me to paint her 2 owls, I jumped in.

At first. I thought I didn’t know what I was getting myself into. I have never drawn birds, let alone an owl. So yeah i did it all by feel,  I tried and failed many times before I came up with this guy on the right.

Rainbow Owl, as I call him was inspired by a google picture of this beautiful brown owl with soulful eyes. I painted the eyes first and then I decided, on the spot that he should be magical. You know, like Hedwig magical. I wanted him to sparkle in the night sky. I used simple colors on him, wet on wet for the feathers, allowed it to dry and enhanced it with a semi wet brush to do feathers.

It was relaxing to create it, there was not a lot of pressure in creating them. I just knew what it was that I wanted to show in my head and this thing happened.

The Second owl I painted was a close up. I do love owl eyes look and most people think that i draw my manga eyes like owl eyes. XD
Big and bright. I would like to think that they are mesmerizing to look at as well.

In any case, Stardust Owl, came to being after I was inspired by an  owl named Zeus. He was blind and had stars in his eyes. His eyes looked so starry it was hard to look away. He was beautiful and I knew I wanted to paint another owl which was like him. 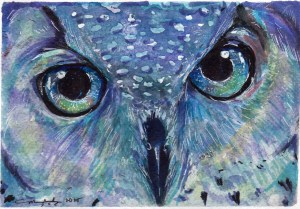 I attempted Zeus many times and failed until I decided to use a regular owl’s eyes and use the colors around the dark pupil. It worked! I was so happy. Now, stardust can stare at me with those beautiful eyes any time.

These owls are a learning experience for me. A time for me to challenge myself in painting. There is a looong way to go but at least I can do owls now. Maybe next time, I’ll try a hummingbird, or a cat.

This is Marikit's Sketchpage filled with WIPs, Finished work, doodles, scribbles about my original ideas, fanart and more from this self-taught artist. Marikit is a self-taught artist learning more about art and the world around her.

This site uses Akismet to reduce spam. Learn how your comment data is processed.